Help identify common rats and mice your find around the home.

Rats and mice do not need a lot of space to get into your structure and make it THEIR home. Not only that, but they can get in by climbing straight up the side of it! Crazy, but true. We have some pictures to help you with these critters and things to do with your structure to deter these little buggers. Mice can enter through an opening 1/4 inch, and a rat can come through an opening 1/2 inch in diameter!

What They Leave Behind:

Rats and mice cannot see well; they run along the perimeter of rooms to use their whiskers in finding their way around. While doing this, they leave behind urine, feces, and gross rub marks (nasty dirty looking streaks of hair oil and dirt)! Other rodents within the area also use all of those as a means of communicating with each other. They are mainly leaving a “popcorn” trail straight to their little party, which maybe unfortunately located in your structure.

The fun these little guys have once they set up shop in a structure can be VERY expensive, leaving you with the tab. The teeth on these rodents can gnaw through concrete and to keep them from overgrowing in their mouth, they chew ALL the time. What do they like to gnaw on you ask? EVERYTHING! Your wires, the internet hook up, your plumbing, walls, and whatever else they feel like nibbling on.

How Can A1 Home Pest Control Help Me?

Have no fear, A1 Home Pest Control (a.k.a. party poopers) has several different treatment options for rats and mice so you can live rodent free.

First, we schedule a free inspection of the property. These assessments take time to perform, and we never rush through them.  Entry points, areas of concern on the property (tree limbs touching, etc.) and planning a strategic trap out are then gone over with you. Each rodent situation is never the same, so they have to be done by inspection only. 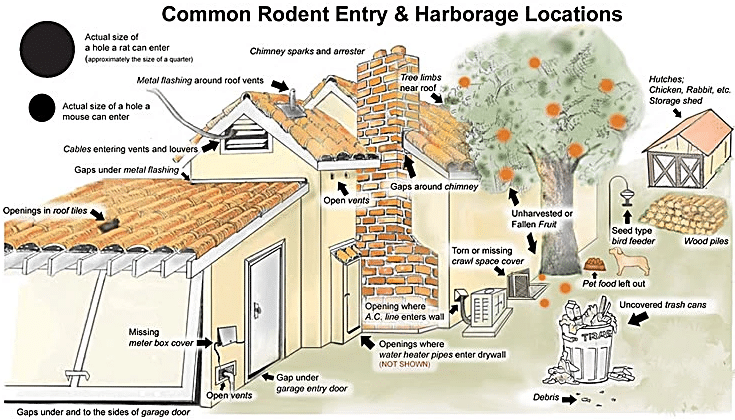 The Norway rat goes by a lot of different names such as sewer rat and house rat. Out of the two rats commonly found in homes, the Norway Rat is the larger of the two weigh at up to a whopping pound and a quarter. Personally, we know some are more significant in size. Their fur on top is brownish with a hairless, short tail. Their nose is blunt with small eyes, and their little ears are set closely together. Now they do become mature and produce liters at three to five months of age.  Over the course of their life, they have four to seven liters of eight to twelve young. That’s a lot of baby rats!

Norway rats preferred habitat is in the ground under slabs of concrete, garbage piles, wood piles, and along streams. Generally, they will leave the nest at night in search of food and nesting materials then return by morning. Unfortunately, these rats will eat anything from animal products, fruits, grains, snails, roaches, and animal feces to name a few! (GAG) Now you know about Norway rats not that you probably wanted to. Yes, they can carry fleas, ticks, mites and be vectors of diseases.

This picture below is a Norway Rat, take notice of the blunt nose, stout body, short and hairless tail. 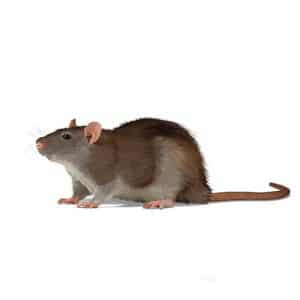 Okay, of course, they have nicknames to such as the fruit or citrus rat. The Roof rat has a tail that is long which is twice the length of its body, and it also has a very pointed nose. But the difference between a Norway and Roof rat does not stop there. Roof rats have large ears, eyes and weigh less at under a pound. Age of maturity is the same as a Norway rat, with each female being able to have up to six liters of eight young. At least they are a bit slower at reproducing but not by much. We can say that these rats are vegetarians preferring vegetable matter, fruits, nuts, and grains in their daily diet. I’m starting to like them better already, they eat healthier and have less little rats running amuck. So, what neck of the “woods” do Roof rats live? Along with their diet and off sping habits, they live a bit more posh in the upscale areas of trees and homes. Hence the name Roof Rat, they enjoy attics, hollow of trees, rafters, and elevated locations. A word of caution, they can swim.

A picture of a Roof Rat, look at this one compared to the Norway Rat. The Long pointed nose, big ears, and tail that goes on forever. (This is the best picture we could find) 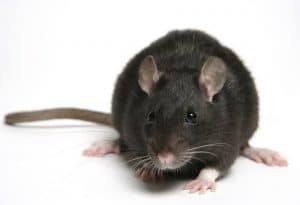